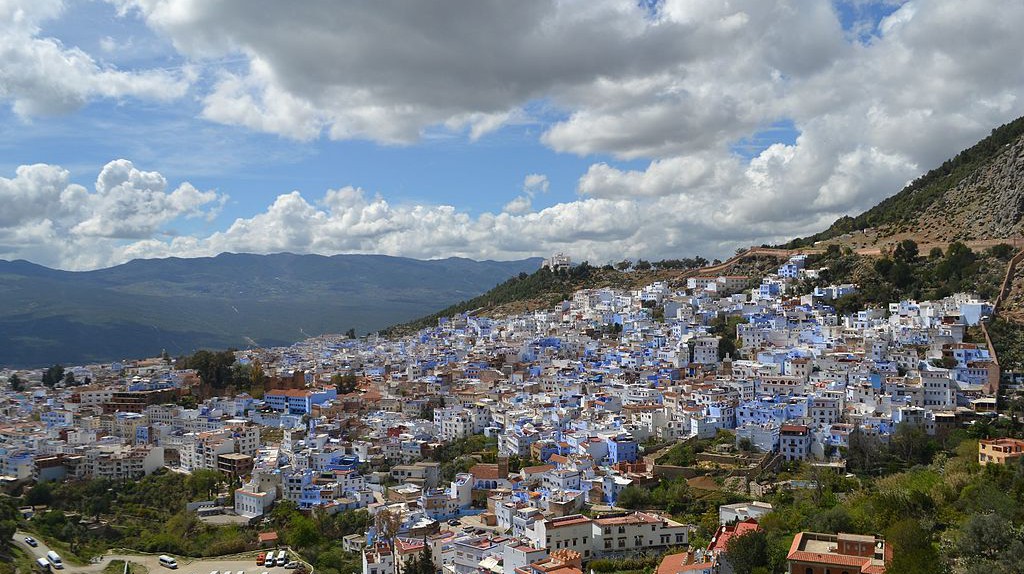 Whether planning a trip to the Maghreb or looking for some inspiration for your next global adventure, there are many diverse experiences to be enjoyed in the captivating and enchanting country of Morocco. Check out some of Morocco’s must-sees with our guide of 20 attractions not to miss.

Erg Chebbi, near to Merzouga, is a dramatic 50-kilometre-long series of sand dunes. Reaching up to 150 metres’ height in places and with a width of five kilometres, the large dunes offer a spectacular experience in the Moroccan Sahara. Camel treks through the dunes and to local Berber villages are popular.

A historic citadel, the majestic Ait Benhaddou is located close to Ouarzazate. On the edges of the desert, the picturesque UNESCO-listed village has been used as a shooting location for a number of films. Although many previous occupants now live elsewhere, a walk through the maze-like citadel shows how people used to live in the past. The multi-level dwellings, with the lower levels reserved for livestock, and merchants’ homes are all built from mud.

The UNESCO-listed Volubilis is a large ancient Roman site close to Meknes. Thought to be the old capital of Mauritania, the ruins include soaring columns, foundations, well-preserved mosaics, tall archways, steps, and stone blocks. See where grand buildings once stood and imagine the area’s splendour in its heyday.

A beautiful stretch of beach along Morocco’s southern Atlantic coast, the rocky Legzira Beach is known for its red cliffs and natural stone arch. Although one magnificent stone archway unfortunately collapsed, there is still another remaining beautiful arch to admire. The rugged coastline is scenic and the windy conditions attract keen surfers and paragliding enthusiasts.

One of the most beautiful monumental gates in the entire nation, Meknes’s Bab el-Mansour is adorned with striking tilework and decorative calligraphy. Built in the 1730s, it was the main gateway between the city’s old medina and the former royal capital.

Colourful, active, atmospheric, and more than a little pungent, the tanneries of Fez let visitors see part of the ancient leatherwork processes. Watch as hard-working men treat and dye leather in large pits, using methods that have remained largely the same for several hundred years. There are several viewing areas, accessed through leather shops, from where you can watch the work in the Chaouwara Tanneries.

One of Morocco’s most charming destinations, Chefchaouen is unusual because of the blue tones that grace the walls of buildings in the old medina. As well as being picturesque and photogenic, the medina also lets visitors see the local way of life. Head to the river and watch locals beating and washing carpets, step inside the high walls of the old kasbah, and see the Grand Mosque with its octagonal minaret.

Situated close to the village of Tanaghmeilt in the High Atlas Mountains, Ouzoud Waterfalls is a large series of cascades that are surrounded by reddish-coloured cliffs and green valleys. Visitors can walk along paths lined by olive trees to reach the bottom of the 600-metre falls. Keep an eye out for mischievous monkeys that swing through the trees.

The tallest mountain in Morocco, Jbel Toubkal stands at 4,167-metres high. Part of the High Atlas Mountains, it attracts adventure travellers, hikers, and lovers of the great outdoors. The mountain’s peak provides sweeping vistas and the surrounding national park is filled with interesting wildlife.

Koutoubia Mosque is the symbol of Marrakesh, an impressive jewel in an already spectacular crown. Although non-Muslims aren’t allowed inside the building you can admire the tall minaret from the outside, feast your eyes on the ornate decorative details, and stroll through the leafy gardens.

The main square in Marrakesh, Djemaa el-Fna is known for its carnival-like ambience. Especially lively in the evenings, fortune tellers, musicians, henna artists, dancers, and people wearing traditional outfits are among the sights to see. The smells of cooking waft through the air and visitors can try an array of Moroccan street food. During the day, highlights include market stalls with a colourful array of wares, snake charmers, and monkeys.

Kasbah of the Oudaias, Rabat 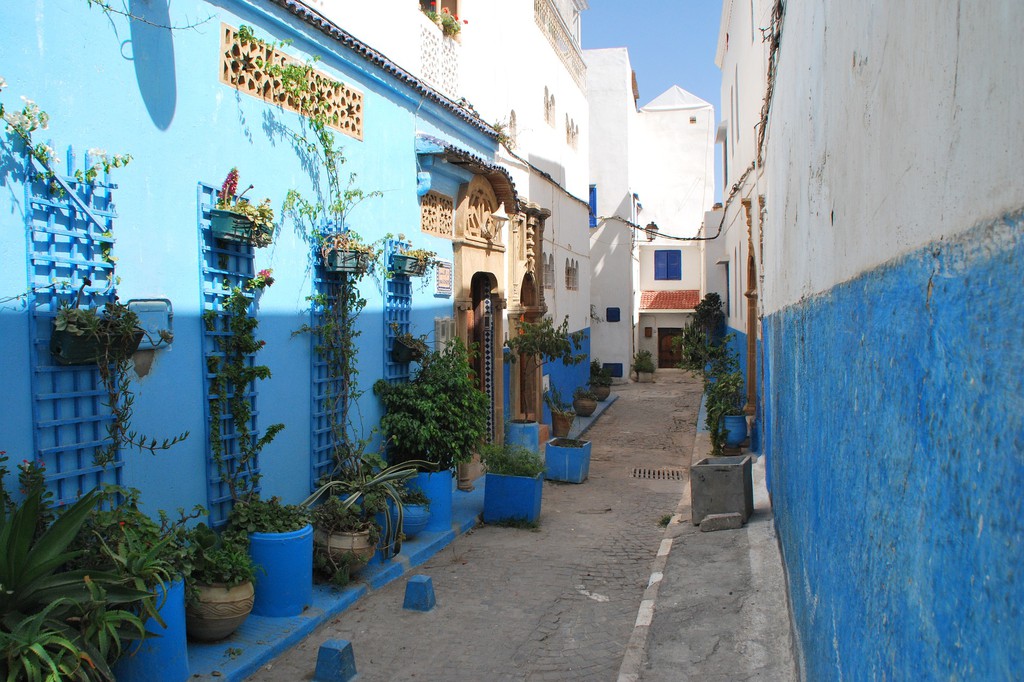 Step inside the high, sandy-coloured walls of the old citadel of the Kasbah of the Oudaias in Rabat and take a stroll through the narrow residential streets. Many homes are painted white and blue and Spanish influences can be noticed. There are pretty Andalusian gardens to admire within the fortress complex, as well as the imposing ornamental gate of Bab Oudaia.

A stunning palace in Marrakesh, Bahia Palace dates back to the late 19th century. The large complex has many rooms, as well as gardens and courtyards. With a name that means “Brilliance”, it’s little surprise to find marvellous decorative details on the walls, ceilings, floors, and doors all throughout the former palace.

Steeped in myths and legends, Hercules Cave in Tangier sits above the crashing waves of the Atlantic Ocean. The entrance to the cave displays a number of traditional items and artefacts. Go down the steps and admire the small interior waterfall, rock formations, and statues.

Mosque in the early 1990s, Casablanca’s Hassan II Mosque showcases the finest examples of Moroccan craftsmanship. A beautiful place of worship, the mosque sits next to the Atlantic Ocean. Visitors can appreciate the stunning exterior, complete with one of the tallest minarets in the world, before marvelling at the exquisite interiors.

Housed within a former Jewish orphanage, the Moroccan Jewish Museum in Casablanca is the only museum throughout the Arab world that is dedicated to Jewish history, heritage, and culture. There are many interesting artefacts on display and you can learn more about the role of Moroccan Jews throughout history and the influences the once-sizeable Jewish community had on the nation.

The scenic Ourika Valley is popular with both locals and tourists. There are several walking routes through the valley, along the river, and in the mountains, though for many, the seven-level waterfalls are the highlight of a trip. Climbing the lower levels requires a bit of a scramble up rocks, but the track to the upper levels is less challenging. In addition to lovely views, visitors can also experience Berber life, go rafting, and take a dip in the refreshing water.

Within the Middle Atlas Mountains, Ifrane is often referred to as the Switzerland of Morocco. The charming city, with its Swiss-style chalets, is a prime gateway to the nearby Ifrane National Park. Hiking opportunities through cedar forests abound, and you may spot Barbary macaques.

One of the most well-maintained beaches in Essaouria, the windy stretch of yellow sand along the Atlantic is a haven for surfers and kite surfers. Mogador Island juts up from the waters, camels and donkeys trot across the sands, the squawking of seagulls rings through the skies, the salty sea air combines with the smells of seafood, and the old citadel overlooks the waves.

THE STORIES & SECRETS OF MOROCCO´S RUGS

GOING OFF THE GRID IN THE ATLAS MOUNTAINS