10 REASONS WHY YOU SHOULD VISIT MOROCCO 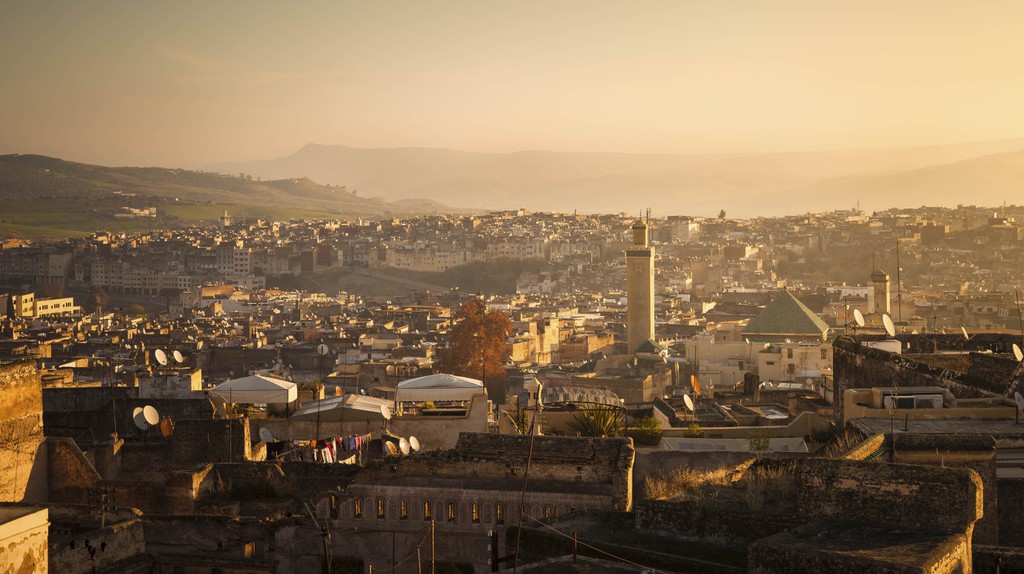 Save to WishlistNorth Africa’s Morocco is a popular destination, attracting culture lovers, backpackers, adventure travelers, couples, families, foodies, and more. Here are the ultimate reasons why Morocco is a great place for everyone.

Old Imperial Cities With Plenty of History and Character

Morocco has four imperial cities: Marrakech, Fes, Meknes, and Rabat. Rabat is the current capital city. Although a modern city at first glance, it has several interesting historical attractions, such as the Kasbah of the Oudaias, the old medina, and the Hassan Tower. The gleaming Royal Mausoleum is also well worth a visit.

Known as the Red City, Marrakesh is famous for its old Medina, numerous shocks, ancient palaces like Badi Palace and Bahia Palace, the striking Koutubia Mosque, the energetic Djemaa el-Fna, and the Saadian Tombs. The former capital of Fes boasts plenty of stunning architecture, though it is perhaps most known for its large tanneries and for being home to one of the oldest universities in the world. Meknes has one of the most impressive monumental gates in all of Morocco, Bab el-Mansour. Horse drawn carriages are a great way to explore the charming and relaxed imperial city. 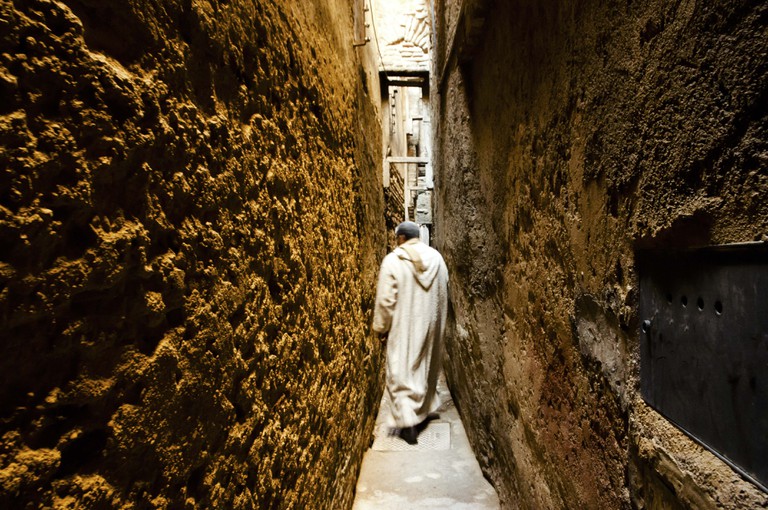 Gorgeous Beaches Along the Stretching Coastlines

Morocco has beaches along both the Mediterranean Sea and the Atlantic Ocean. There are many lovely beaches to relax on. Popular holiday spots with foreign visitors include Tangier and Agadir, while Assilah attracts mainly locals and Spanish visitors. Although fairly under-visited by international tourists, places like El Jadida, Oualidia, and El Jebha see significant numbers of domestic tourists during the summer months. The most popular beaches typically have great facilities within easy reach, and some destinations, such as Essaouira, are perfect for lovers of water ports. 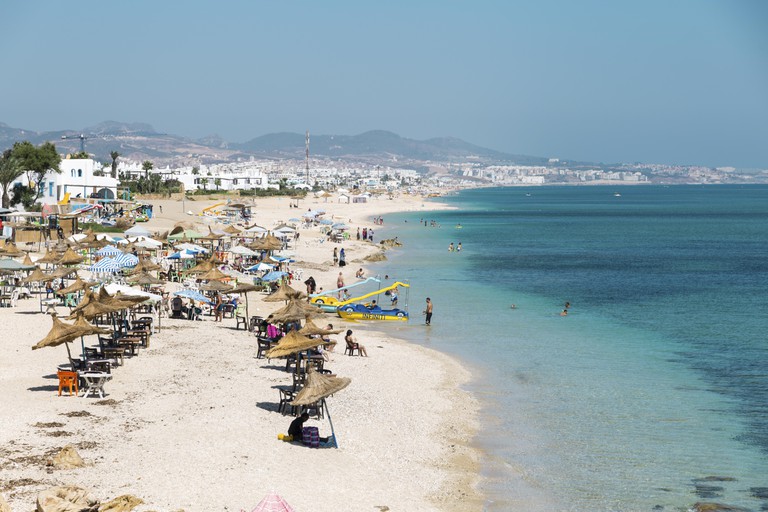 Diverse Mountain Ranges Appeal to Fans of the Outdoors

Morocco’s Atlas Mountains have three separate ranges: the High Atlas, the Middle Atlas, and the Anti Atlas. Each offers a variety of hiking experiences for people of all experience and skill levels. Jbel Toubkal is the country’s highest mountain, located in the High Atlas Mountains. Easily reached from Marrakesh, the soaring giant attracts many outdoor lovers all year round. The Rif Mountains, in the north of the country and close to the blue city of Chefchaouen, are also great for outdoor adventures. Hiking, mountain biking, and horse riding are among the attractions people can enjoy in Morocco’s mountains, as well as visiting Berber villages, bird spotting, and seeing local wildlife.

A kasbah in the Atlas Mountains. 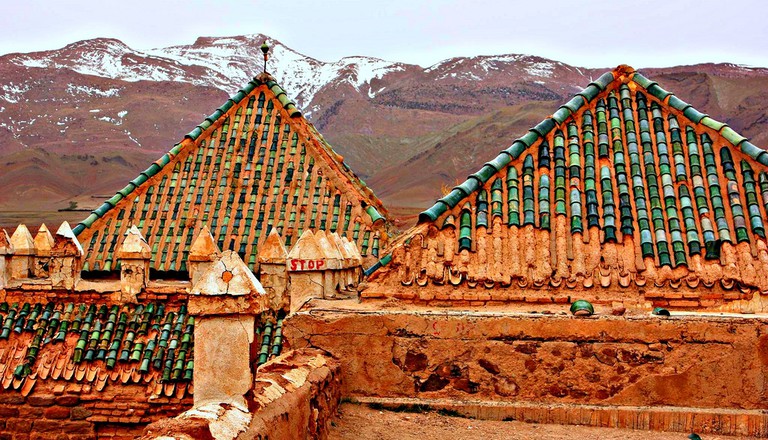 The vast and arid Sahara Desert is the world’s largest hot desert. There are several places in Morocco from where you can begin expeditions into the desert, and there are plenty of experienced operators offering trips to remember. Whether you want to trek by foot, ride on the back of a hardy camel, explore by horseback, or sail across the sands in a four-wheel drive, there are various ways to enjoy the impressive landscapes. Camping trips are popular; marvel at the abundance of twinkling stars in the dark night skies, devoid of any light pollution, and listen to the sounds of nothingness. The sight of large dunes and remote oases will linger for a long time. 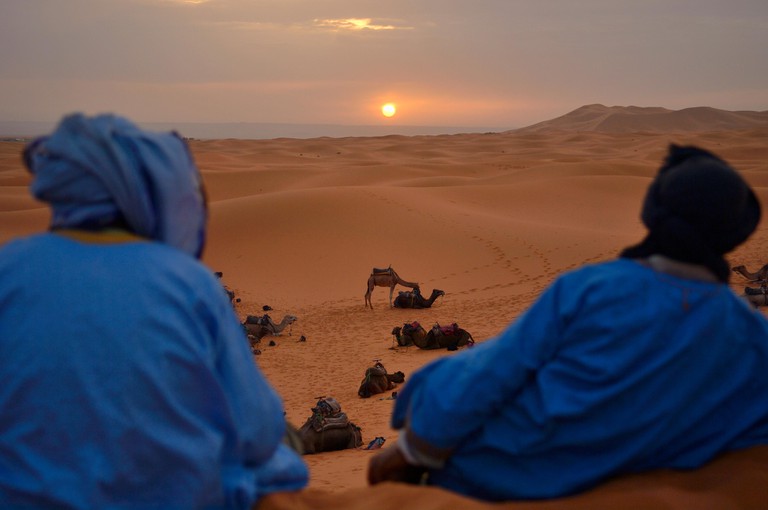 Merzouga, Erg Chebbi, Chegaga, and Zagora are some of the best places to venture into the Moroccan Sahara. Ouarzazate, commonly referred to as the doorway to the desert, is a fabulous destination for both culture and film lovers, with one of the country’s most impressive kasbahs that have featured in many movies.

Morocco’s population is made up of both Arabs and Berbers, with each group having contributed to the rich traditions and cultural practices that can be observed in the country today. You will also be able to spot influences from Andalusia, from the times when Andalusian Muslims moved to North Africa. There are also legacies from the colonial era, with French, Portuguese, and Spanish influences seen in different parts of the country. Especially interesting for a predominantly Islamic nation, there have also been influences from Jews in Morocco. Indeed, you’ll find the only Jewish Museum in the entire Arab world in Casablanca. 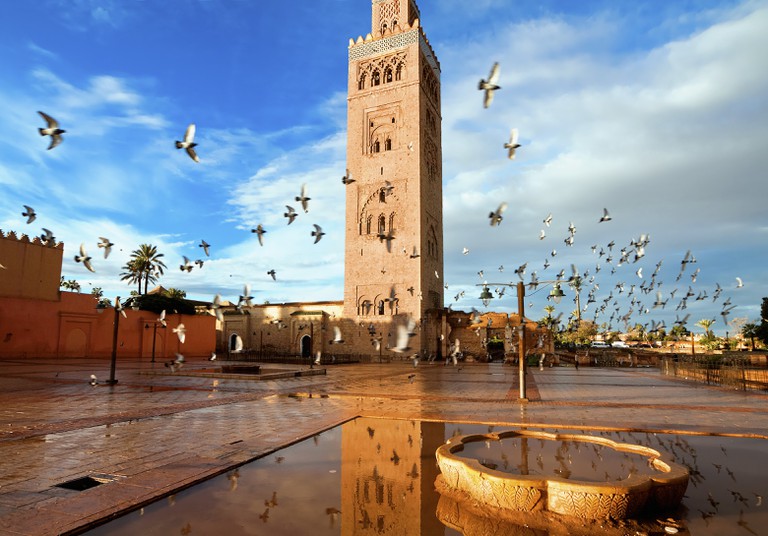 Exquisite Architecture All Around the Country

The cultural diversity of Morocco is reflected in the varied architectural beauties that can be found all across the nation. From majestic mosques to traditional riads and from brilliant palaces to sublime centers of religious study, Morocco has many fabulous buildings to admire. Many buildings feature the traditional tilework, known as zellige, as well as decorative carvings, woodwork, and plasterwork. Some of Morocco’s most beautiful buildings include the Hassan II Mosque in Casablanca, the Saadian Tombs in Marrakesh, the Grand Mosque in Tangier, and the Mosque and University of al Quaraouiyine in Fes.

Excellent Shopping at the Vibrant Souks

Every major city and town in Morocco has at least one souk, with most larger settlements having more than one. Souks are traditional marketplaces where locals go to buy an array of wares. In some areas, souks may set up on particular days of the week, while the markets are held daily in other places. The souks have become something of a magnet for shopping-loving travelers, drawn by the evocative colors and scents and the overall sense of the exotic. Haggling is part and parcel of the souk experience. Common items to peruse and buy include spices, clothing, lamps, tea sets, musical instruments, and shisha pipes, as well as a range of souvenirs in more touristy destinations. 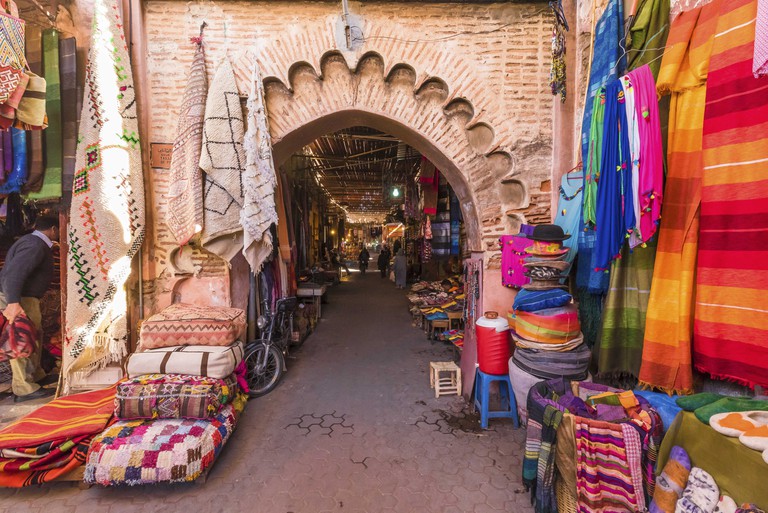 Morocco is know for its tasty cuisine. Spices are found in abundance in a typical Moroccan kitchen, adding plenty of flavor to dishes. Bread is a staple food, and there are various types, such as khobz, msemen, and baghrir to enjoy.

Meat is a common ingredient in Moroccan dishes, with lamb, mutton, beef, and chicken being the most common. Seafood and fish are especially plentiful in coastal areas. Sardines are a particular favorite in Morocco. The most well-known Moroccan dishes include couscous and tagine. Pastilla, bissara, harira, and brochettes are other dishes to try. You’ll also find numerous sandwiches and pizzas, as well as a wide array of Moroccan pastries. 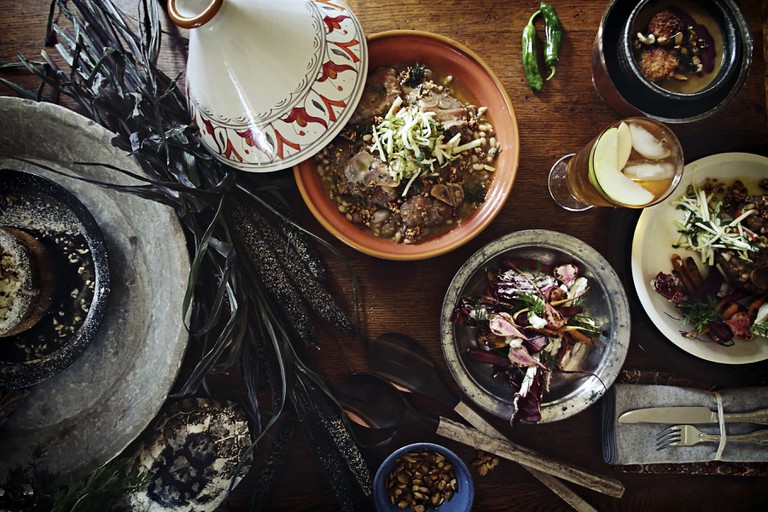 Wide Range of Accommodations to Suit All Tastes and Budgets

From plush five-star hotels to rustic tented camps in the mountains, Morocco offers a place to stay to suit all budgets, comfort levels, and expectations of adventure. Travelers can stay in traditional Moroccan accommodations, known as riads and dars, in the old medinas of many cities. This is a perfect way to experience life as a local. With smaller properties, it is sometimes possible to rent the entire establishment for a private stay.

Self-catering apartments are readily available in many towns and cities, which are ideal for larger families and groups of friends. Apartments are also great if you want the option of preparing some meals at your accommodation in addition to sampling the delicious Moroccan cuisine; perhaps you could take a cooking class, learn how to cook Moroccan fare, and put your new skills to the test! Large resorts can be found in many large cities and beach areas, such as Tangier and Agadir, many with a broad array of facilities like swimming pools, onsite gyms, restaurants, bars, and kids’ clubs.

Berber man preparing tea for guests at a camp near Guelmim in the Sahara desert, Morocco. 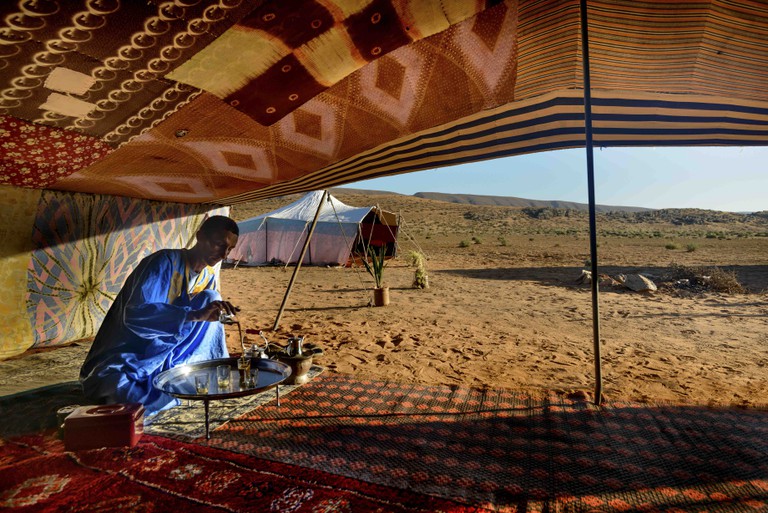 Morocco is known for being one of the most tolerant of the Arab nations. The country is relatively safe, peaceful, and stable. Moroccan people, both Arabic and Berber, are also noted for their warm hospitality and warm, friendly nature. Tourists may receive curious looks in areas that see few visitors, but this is often followed by cheery waves, especially from children, and attempts to strike up a conversation. As a former French colony, French is widely spoken. In popular tourist areas, English is commonly spoken too. Communication is rarely a problem for visitors.

Morocco offers so much for all; when are you planning to visit? 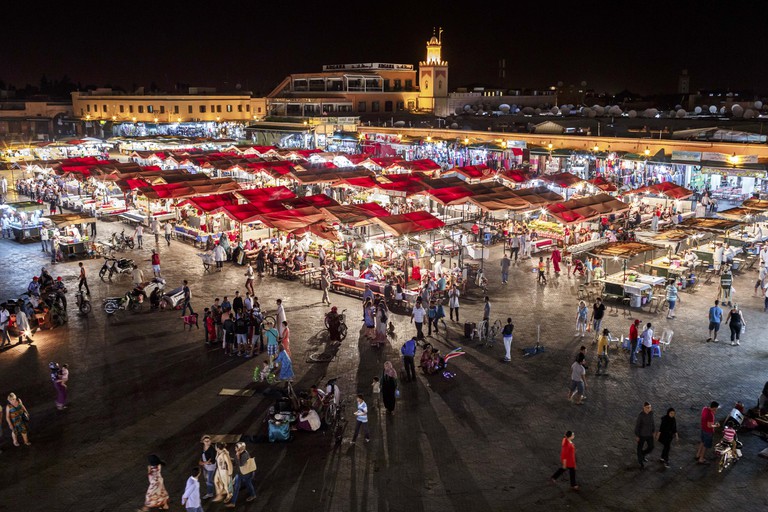 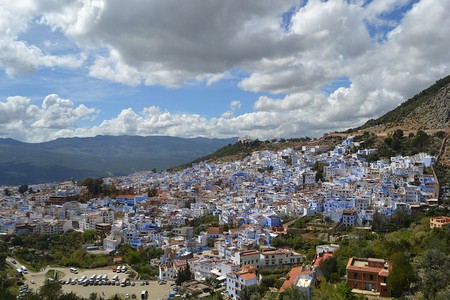 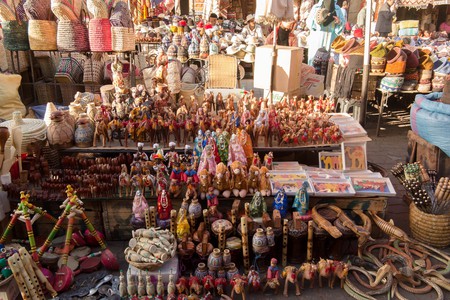 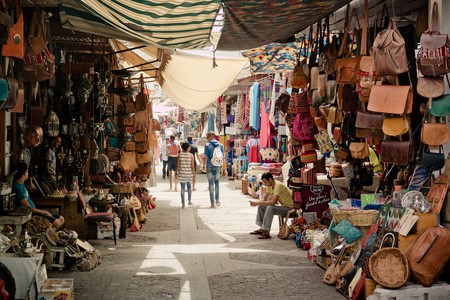 THE STORIES & SECRETS OF MOROCCO´S RUGS